Have you made your pledge to DIFF?

The vast majority of us have been there: Sitting in heavy traffic, tempers flaring and aggressive drivers cutting in and out of lanes.

Now you have a chance to do something about it. Join Cowart Insurance Agency and Safeco Insurance in promoting positive driving behavior with Drive It Forward Fridays (DIFF).

We at Cowart Insurance already made our DIFF pledge to be more courteous drivers, and we hope you’ll join us in making driving in and around Dacula, Georgia more pleasant – and safer.

We sure could use everyone’s help! A new Safeco Insurance survey found that more than four out of five drivers have experienced others’ aggressive driving behavior, and it impacts them negatively. Some of the driving behavior that those surveyed said they would like to see stopped included cutting off other drivers (59 percent), using high beams toward oncoming traffic (57 percent) and tailgating (56 percent).

In some cases, the survey found a complete lack of road manners in startling situations. More than one-third (37 percent) of those surveyed have watched other drivers cut a funeral line; more than half (54 percent) have seen able-bodied drivers take handicap spots; and 42 percent report seeing other drivers cut off a school bus.

“People’s emotions and anxieties often will play out on our roads and highways, putting us all in tense, high-stress driving conditions that can be dangerous,” said Jonathan Alpert, a Manhattan-based psychotherapist and author of the book, Be Fearless: Change Your Life in 28 Days, who has written about road rage.

“A movement such as ‘Drive it Forward Fridays’ is not only good for society, but it's good for your mental health,” said Alpert. “Simple positive acts can have a huge impact on how you feel by activating the reward center in the brain, meaning it really can make you feel good.”

Alpert offers the following tips to Drive it Forward and move beyond aggressive driving with positive driving interactions:

And please, join Cowart Insurance in making a DIFF! 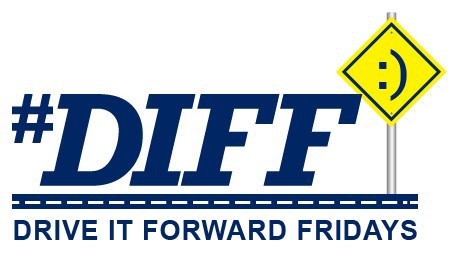